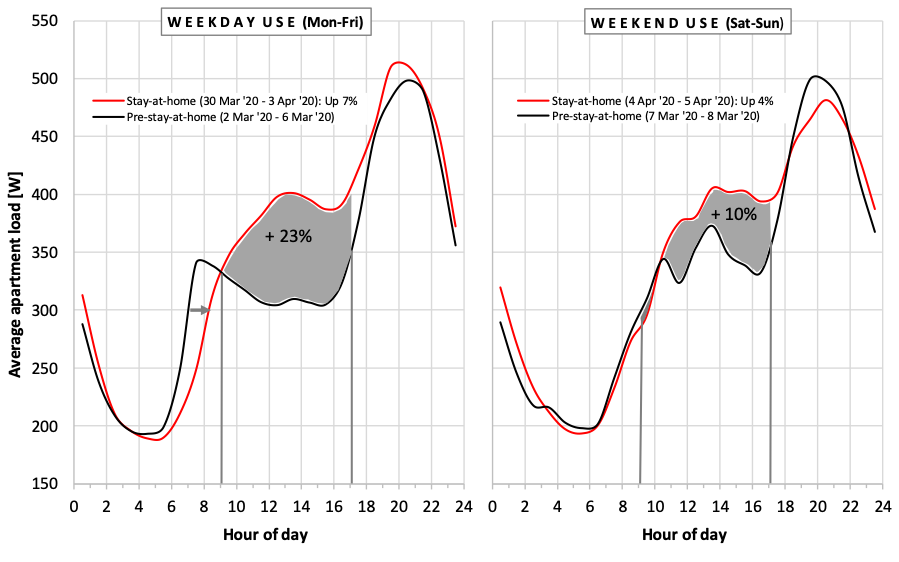 The global reach of COVID-19 is impacting almost everybody, and New York City is squarely at the epicenter. The metropolis is largely shut down, and while some have left the city, most residents remain, sheltering in place under a statewide order that went into effect on March 22. Excepting essential workers, almost everyone else is home nearly 24-7, conducting work, schooling and everything else in life—all from the confines of a New York City apartment.

Through a study that began in 2018 and is continuing today to observe electricity consumption across some 400 New York City apartments, we have been able to quantify how apartment-level electricity consumption has changed after the stay-at-home order. While the New York Independent System Operator reported that the city’s total electricity usage was 2 to 18 percent below normal for the week ending April 3, we have actually seen substantial increases in consumption for the residential sector.

Overall, weekday electricity use in apartments increased by 7 percent after the stay-at-home order, while weekend use increased by 4 percent. Total New York City electricity use still decreased for the same periods simply because nonresidential sectors such as office buildings and businesses use a larger portion of the city’s total electricity.

During the Monday-to-Friday 9am-to-5pm window, when most household members would normally be at work, at school or engaging in other activities outside the home, increases were even larger: We see a 23 percent increase in average apartment-level electricity consumption during those times. This additional daytime consumption, which normally would be met by employers or institutions, has now been shifted to individuals. For the many New Yorkers already suffering from the economic consequences of the crisis, any increase in monthly energy bills will only make matters worse.

We also see shifts in load during the weekday morning hours. The pre- stay-at-home morning ramp-up in residential load — which started about 6am and peaked at 7:30am, and then declined — no longer occurs. Instead, stay-at-home behavior shows a softer ramp-up that starts at 6am, reaches the level of the pre-stay-at-home morning peak at 9am, then continues to rise throughout the morning and early afternoon. This load shift for weekday mornings also shows up in the overall city-level consumption pattern observed by NYISO. And it mirrors observations made by others that morning residential weekday electricity usage now looks more like the weekend.

Heating in most New York City apartments is provided by central building-level systems. Therefore, our study does not capture any additional heating-related increases in energy usage where people live in individual houses. And, it should be noted that if the stay-at-home order extends beyond the current May 15 deadline into the hotter months, the additional electricity needed to cool apartments with window air-conditioners or fans will only increase the burden of energy costs on households. Additional daytime summer cooling loads could result in afternoon peak loads that are higher and more sustained in ways that might adversely impact the stability of the grid.

There is no reason to expect that the changes we are observing in New York City are not occurring in other U.S. regions, or elsewhere in the world. Furthermore, in places where energy loads are primarily residential, and there is not a proportional reduction in nonresidential load, we would expect to see total energy demands increasing — along with higher risk for disruptions to existing energy supply and distribution systems.

Energy systems are the backbone of most economies. They are also essential to medical care, scientific research, manufacturing and other crucial activities needed to battle the pandemic. A better understanding of how energy usage is shifting between sectors may help prevent disruptions to these systems. Such understanding can also highlight how shifts in usage between sectors may further deepen the financial inequities created by the economic crisis that is accompanying this pandemic.